How is the Internet Changing the Way You Think?

/La Pagina Giuridica/How is the Internet Changing the Way You Think? 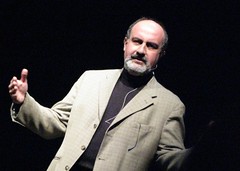 You may agree or not but this is the opinion of Nassim Taleb (author of The Black Swan) on how is the Internet changing the way we think. I’m attracted by the idea to put in relationship what Nassim Taleb says here with the discussion on Trasparecy started after the now famous article published by Lawrence Lessig on The New Republic.
Excerpt from Edge, the world question centre:
I used to think that the problem of information is that it turns homo sapiens into fools — we gain disproportionately in confidence, particularly in domains where information is wrapped in a high degree of noise (say, epidemiology, genetics, economics, etc.). So we end up thinking that we know more than we do, which, in economic life, causes foolish risk taking. When I started trading, I went on a news diet and I saw things with more clarity. I also saw how people built too many theories based on sterile news, the fooled by randomness effect. But things are a lot worse. Now I think that, in addition, the supply and spread of information turns the world into Extremistan (a world I describe as one in which random variables are dominated by extremes, with Black Swans playing a large role in them). The Internet, by spreading information, causes an increase in interdependence, the exacerbation of fads (bestsellers like Harry Potter and runs on the banks become planetary). Such world is more “complex”, more moody, much less predictable.
So consider the explosive situation: more information (particularly thanks to the Internet) causes more confidence and illusions of knowledge while degrading predictability. (Nassim Taleb)